Here is a card I've created for the Just Add Ink challenge #356 and I've chosen circles and metallic as my two elements. 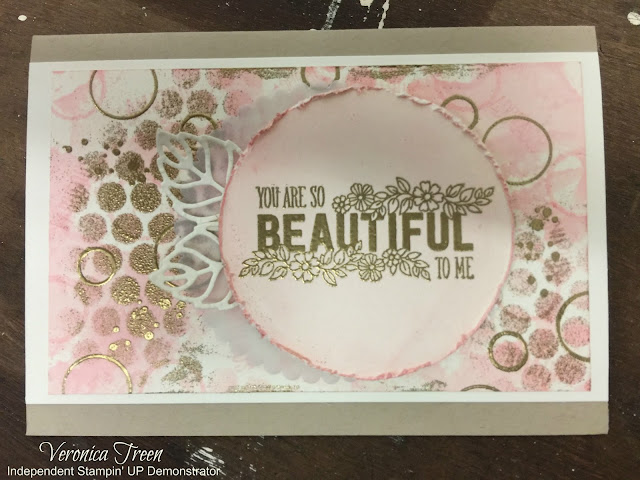 I've used Very Vanilla cardstock with Pink Pirouette ink and gold embossing to create my circle stamped background.  I've then stamped You Are So BEAUTIFUL To Me from the Just Add Text stamp set which was my prize patrol at On Stage.

I've used some dies to create my main feature from cardstock and vellum and then mounted the panel on a Crumb Cake card base.

I'm still playing around with the new Fabulous Flamingo stamp set so decided to make a couple of cards with it based on this week's theme. 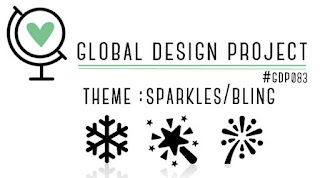 The first card is a simple design that is quite a traditional and almost minimalistic only using a few colours.   There is a small amount of sparkles and bling and you can barely see the subtleness of the Wink of Stella applied to the body of the flamingo.  As is the case with this product it can be quite difficult to capture in a photo but if you look closely you can just see those little winks sparkling away. 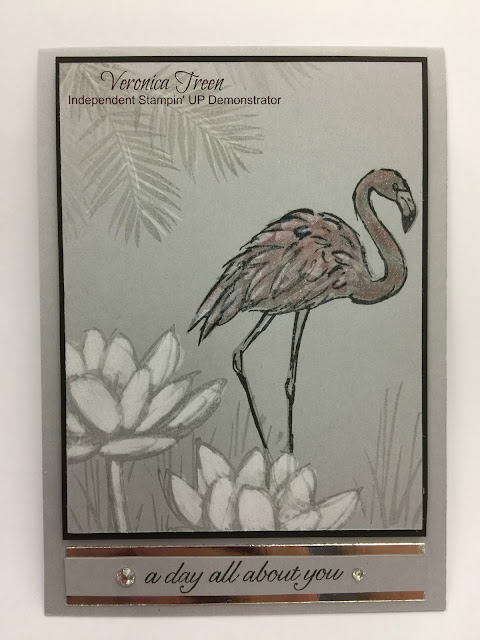 The image of this shabby flamingo sprinkler from the Chippy Shabby blog was the inspiration for my next card which as you can see is a lot more playful that the card above.

I had a lot of fun creating this quirky card.  I fell in love with this sprinkler and would really love to have one for my garden. 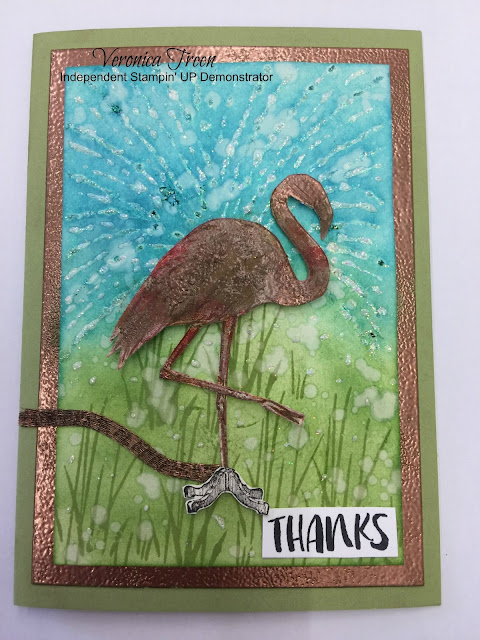 It was great to see that Stampin' UP has included a texture paste in the upcoming catalogue.      When they announced a new embossing paste I envisaged a totally different product to what they demonstrated at On Stage.  I guess they had to create their own name for a product that has been around for a while now and would be very familiar to anyone dabbling in mixed media art.

Along with embossing paste, that can be used as is from the jar or coloured with re-inkers, they also have a four pack of Decorative Masks in the patterns of brickwork, clouds, Moroccan and a doily design.  I would really love to have seen stencils that echo some of their more intricate die designs and so I decided to create my own stencils from cardstock.  Depending on what medium you use, this type of stencil is sometimes only single use but it's easy just to cut another.  The negative can be used as a stencil and the positive, also covered in embossing paste, makes a great embellishment for a card or scrapbooking page. 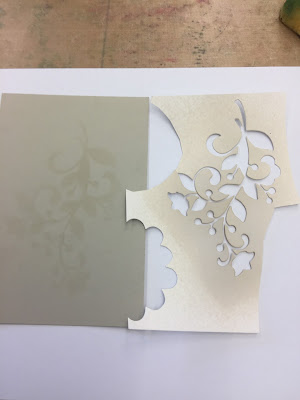 This stencil was created using a piece of scrap.  Not such a good idea because you then have to mask over the gaps to avoid overspray.  I used a mixture of Sahara Sand re-inker and rubbing alcohol in a spritzer to get this air brushed effect and I was able to use the same stencil to get more images on the white cardstock below. 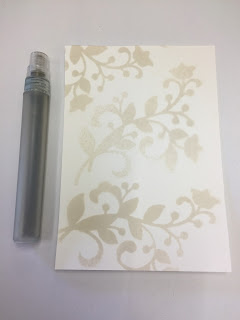 Even though I used rubbing alcohol (instead of water) which aids the drying process, the stencil absorbed too much moisture and I had to cut a new one.  This time I used a full piece of A5 Delightful Dijon cardstock which has never been a favourite and is an outgoing In Colour so a good way to use up my supply. 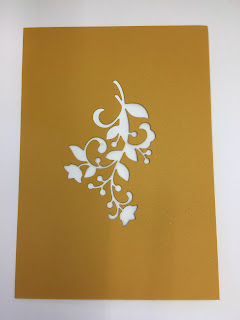 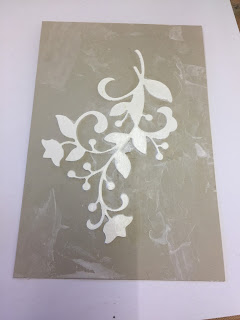 Along with the crisper embossing paste image I also have a couple of  partial images which helps to created a background with a ghosting effect. 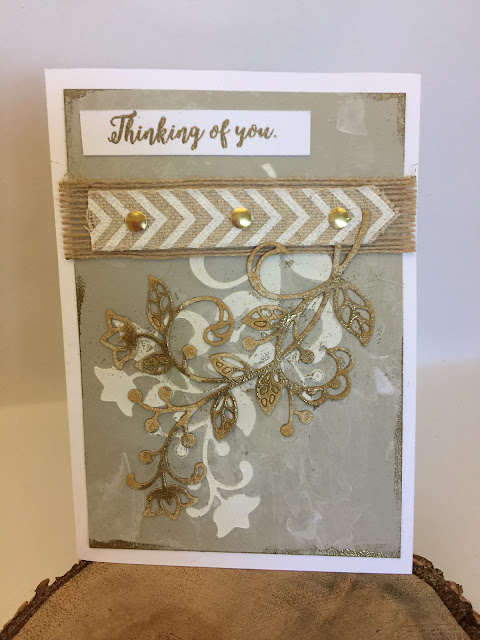 It's not really obvious that the die cut on this card is actually Delightful Dijon as you can see it has been distressed with a mixture of Stampin' UP Embossing Paste and Gold embossing powder which softens the mustardness of this colour.  (I think I just invented a new word!)

I'm certainly looking forward to seeing what projects and uses Stampin' Up demonstrators will find for this new product. 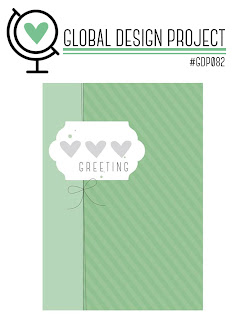 I haven't played for a while so I'm jumping back in during sketch week over at Global Design Project.  As always, there are the designs created by the talented team as well as all the submissions.

I decided to use the "all attendee" stamp set Fabulous Flamingo which, of course, everyone who attended ONSTAGE received along with other prize patrol surprises.  Now that I've seen the tickled pink stamp I can't get that out of my brain and I keep referring to this set by that name. 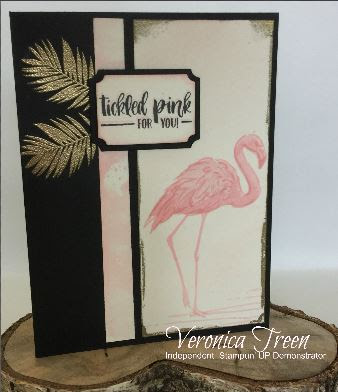 Flamingoes were popular during the Art Deco period so I have that theme in mind when I created my card.  I love flamingoes and was very pleased to see a new stamp set with that theme as well as the carry over of  Pop of Paradise. 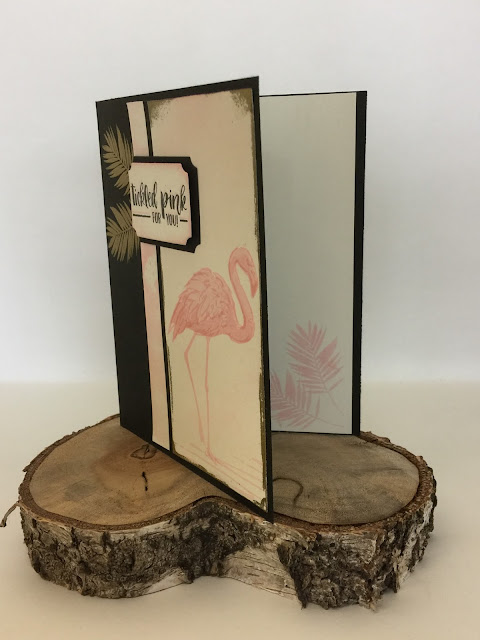 May have just scraped in with this submission!
Posted by one red kelpie at 8:48 PM 2 comments:

This week we are casing the gorgeous and super talented Krista Fratin. 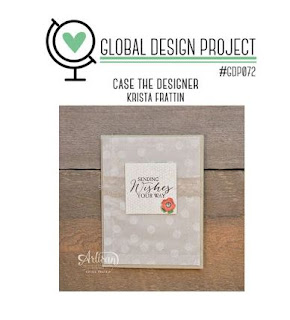 Krista's design is a great one to work from and even though at first glance it appears quite simple it actually gives you a lot of scope.  If you look a little closer though you can see all of the elements that make this such a beautiful card and one of my absolute favourites has to be the stitching.

I decided to create a Valentine's Day themed card and used Jar of Love in conjunction with Foxy Friends.  I had already created my little bobble headed fox a couple of days ago and so he was perfect for this project. 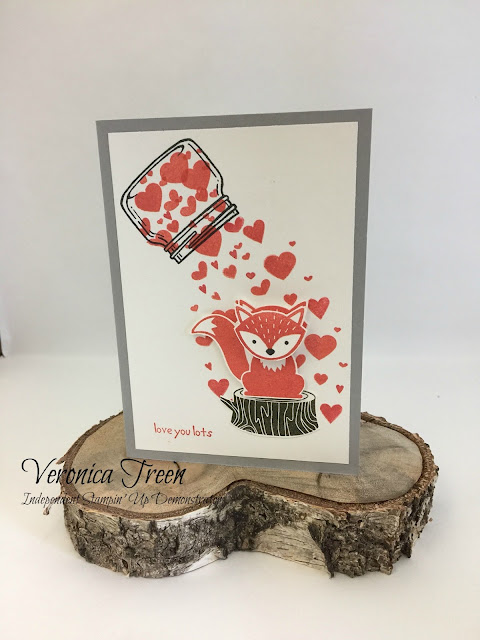 I've added a strip of stamped hearts along the inside. 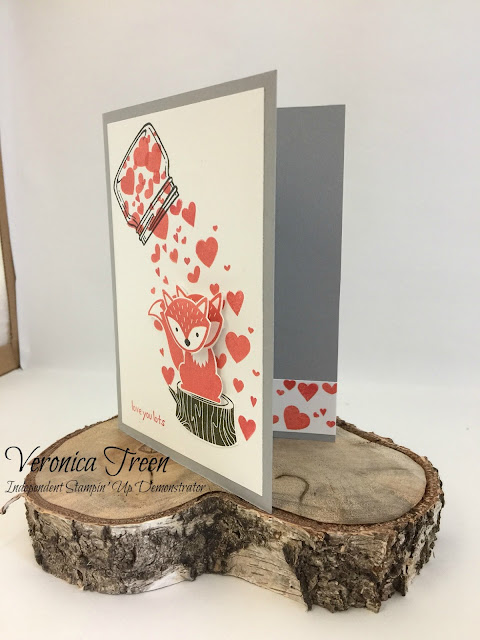 And, here is my little bobble head in action.  This is the first time I've uploaded a video and although it's a little small you can see little foxy in action.

Available now as a free stamp set during Sale-a-bration and I just love the font used for this large thank you stamp.

A while ago I experimented with some water colour paper and ink and created some brightly coloured backgrounds which I though might be ideal for a simple but effective thank you card. 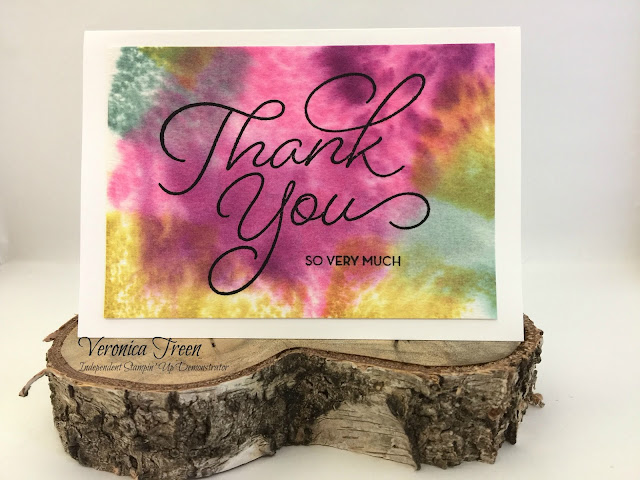 Because the water colour paper is quite textured I used my MISTI to stamp this image multiple times until I was satisfied with the intensity of the black Memento ink.  I was able to position both the sentiments and stamp them the same time.  The MISTI is a really handy tool and once you have the stamps positioned it so easy to knock up a stack of these card for future use.

I decided to create another similar card using Mint Macaron and copper embossing powder but this time I used one of my inked up acrylic blocks to stamp on the water colour paper creating a softer background.  Because I was going to emboss my sentiment I needed to make sure the background was thoroughly dried with my heat gun and it got a good working over with the embossing buddy too. 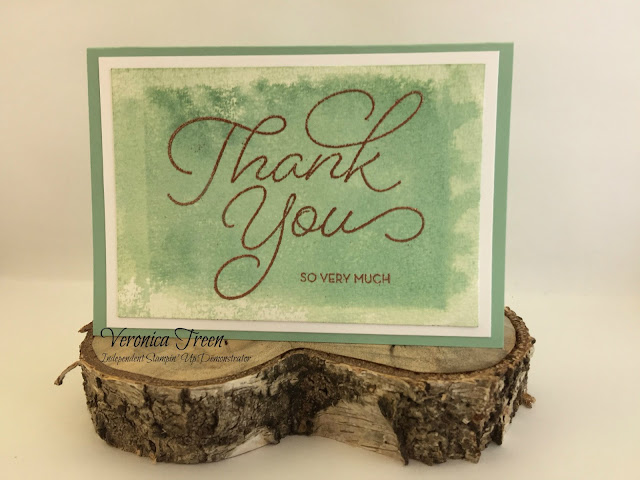 Posted by one red kelpie at 6:49 PM No comments:

Pantone has revealed it's colour for 2017 is named ‘Greenery’, it is described by Pantone as a “tangy yellow-green” often seen in foliage.

I've created a couple of cards using some Stampin' Up Greenery in it's honour.  I've used Mint Macaron, Wild Wasabi, Old Olive and Always Artichoke on both cards.  The greenery stamps from Avant Garden make a cute wreath and as I didn't want to used any other colours except neutrals on these cards, I stamped the flower in green too! 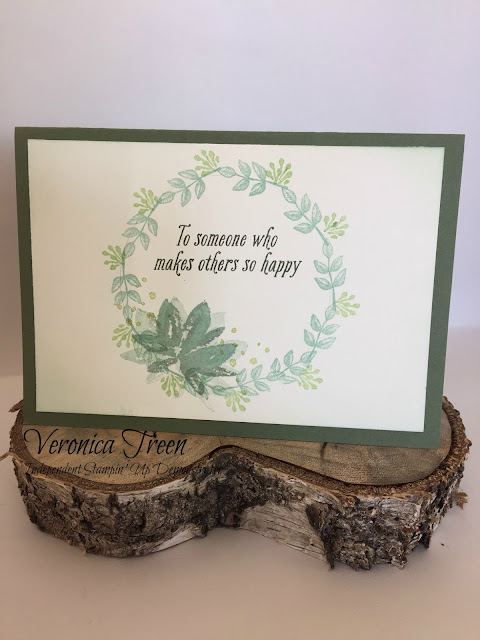 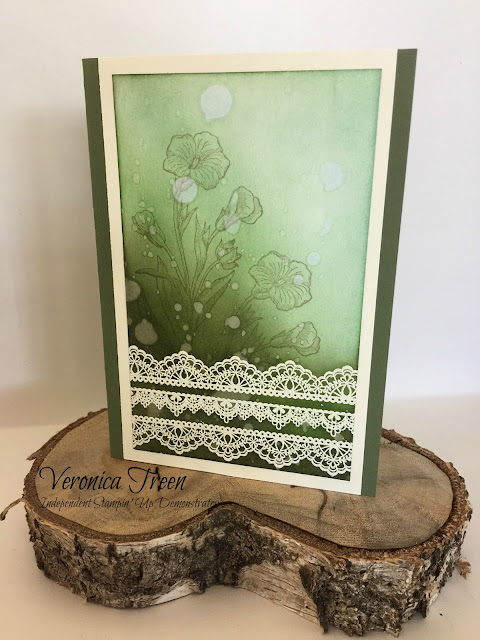 Posted by one red kelpie at 7:52 PM No comments: 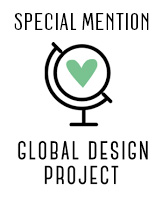 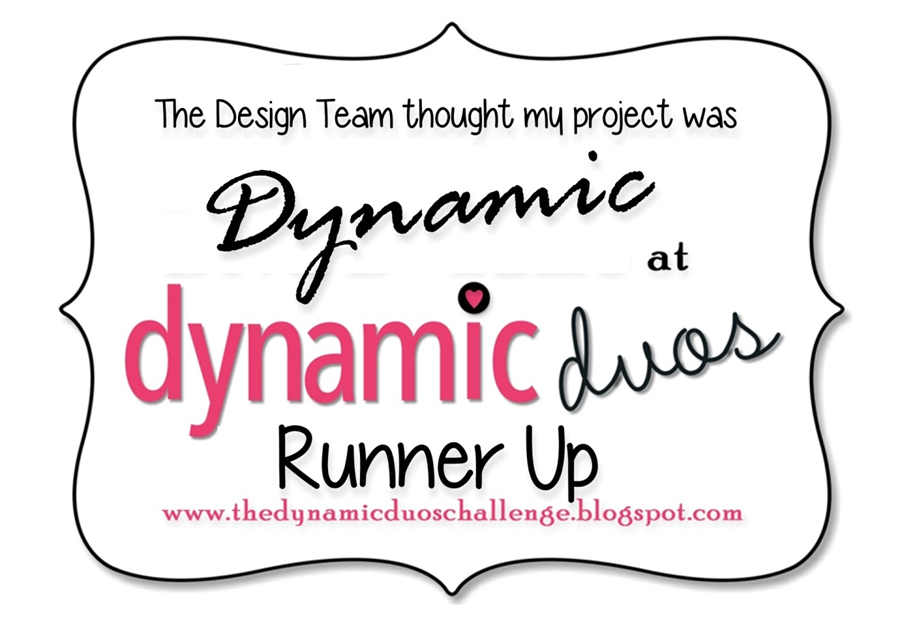